To be offered at Bonhams’ 18th annual Quail Lodge Auction at the Quail Lodge & Golf Club in Carmel (California, USA): a very unique one-off Aston Martin Vanquish Roadster Zagato prototype.
Following in the footsteps of other collaborations between Aston Martin and Zagato, Zagato unveiled this new one-off Aston Martin at the 74th edition of the Geneva Salon in 2004. To the delight of onlookers at the Salon, Zagato has transformed the former testbed Vanquish coupe into a truly open car.

Because the Vanquish is such a beautiful car, designed by Ian Callum, it was decided by Zagato not to modify the whole design of the car as a part of respect for the designer. In particular the front side is unchanged. The big challenge was to find the right proportions in the rear side of the car, with the biggest and most noticeable difference is the hardtop roof which is replaced by a curvy double-bubble of hardened glass.

With only 13.000 miles on the counter, this fully operational concept car looks like a new car. For more information, visit the official website of Bonhams to read the full press release.

With thanks to Bonhams for the fantastic photos, a very valuable addition to our website.

All images above are © Bonhams/Pawel Litwinski. The images may not be reproduced, copied, transmitted or manipulated without the written permission of Bonhams/Pawel Litwinski.
Vanquish Roadster Zagato / Bonhams2016-07-302017-08-04https://astonmartinzagato.com/wp-content/uploads/logo2-01-01.pngAston Martin Zagatohttps://astonmartinzagato.com/wp-content/uploads/1-2.jpg200px200px 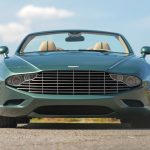 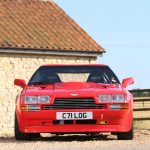